Review #2 of the SurfaceBook - The Honeymoon is Over

It's now been about two months of full workdays with my SurfaceBook. It's taken me this long to write this blog post as I strongly believe in this product and I want to keep using it so much that I wanted to give Microsoft some heads up and time to figure out if they can fix the biggest problems I've faced. Trust me, I'll tell you the whole story and everything there is to it. Sometimes it's just more important for the big picture to help rather than creating headlines. We all know this from the security vulnerabilities point of view.

The first month with my SurfaceBook I call the "Honeymoon". I was so happy and amazed about the product that I could spend my nights at the hotel just Attaching and Detaching the screen from the base and marveling the engineering behind that mechanism.

Now the Honeymoon is over and it's time to give an update how we're doing together today. Yesterday was a breaking point in some way. Next week I need to have a working demo machine to present at NIC in Oslo so I decided to call a friend of mine to fix me a Dell XPS 13 for Friday - Just in case. So as one can imagine the SurfaceBook hobby of mine and its cost to me is starting to make me a bit sad. I wish we were back at the Honeymoon paradise. By Murphy's law last night, after making the plan B, I finally fixed the biggest issue.

There are two major issues for me that are deal breakers. I speak at Big events and I need to have Hyper-V machines running on my local box as I can't put my machines on Azure. I need to be able to boot my demo machines with ISO-images and I can't trust the Internet. In TechEd EU 2012 the Internet connection was down for 36 hours and even at Ignite the connections were down all the time. If you want to be in the top positions as a speaker YOU DO NOT HAVE YOUR VMs BEHIND THE INTERNET CONNECTION without a backup at least - My rule for success #1. I don't want to show screenshots like the Azure demoing speakers need to or be left without working demos at all. So now back to the SurfaceBook.

There's some sort of a shielding issue with the Books USB 3. This only happens on the Book and not on any other laptops I have. None of my 2.4GHz presenters work properly when there is a USB 3 device plugged in next to the receiver. I thought it was because of the magnesium shell but it's not. USB 3 uses frequencies that collide with the 2.4GHz range. People are experiencing bad Wireless performance because of this as well. Intel actually has a document on this that everyone should take a look at: http://www.intel.it/content/dam/www/public/us/en/documents/white-papers/usb3-frequency-interference-paper.pdf The reason why your home wireless is bad might be because you plugged a USB 3 disk or printer to your access point. I've uploaded a video showing this: https://youtu.be/lHA-QAjNZfs

I've fixed this in two ways. I have a BlueTooth device that works quite well - Again 100$ more spent on this project. And I have a fix which is cheaper but looks unprofessional as you can see below: 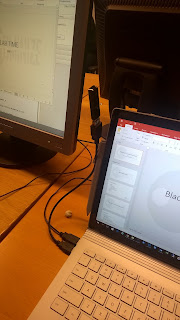 Microsoft is aware and I hope there is something they can do about it. It might a physical issue so if not fixed for my Surface I hope it will be for future patches.

ISSUE 2: USB 3 external disks work only for a few minutes

This is biggest one and the one I fixed yesterday. When ever my USB 3 devices are under load they get to 100% usage level and then they just disappear! I can't run Hyper-V and I can't for example create Windows To Go -sticks. I've tried this with many external enclosures, USB keys and now latest with Samsungs AWESOME 1TB External SSD (size of a credit card!!). 500$ more on the project as I thought I had a broken disk :( I struggled with this and spend time almost every day trying to troubleshoot this for two months. I can't use the book if I can't run Hyper-V with an external SSD - That's just it! I tried different cables, different powered USB hubs, USB2, all the possible power management settings... No success. Yesterday I finally went to measures I don't recommend anyone. I figured out the Intel devices that are used, tweaked the INF-files to cheat Windows it's OK to use them, digitally signed the drivers myself and cheated the Book to trust my signatures. To get this working I needed help from another famous Finn called Kim Dot Com. He runs the Mega download site in New Zealand where I found the first hacked Intel drivers for experimenting with before creating my own. Last night I finally got the tweaked USB drivers installed for the USB 3 controller and the internal hub. And to my amaze.. IT WORKS!! Now Hyper-V is running with multiple VMs and has been stable for hours and hours! Not only does it run but it's actually lightning fast :)

So I'm going to NIC with my SurfaceBook that finally does what I need! :) I couldn't be happier! The ISSUE 1 still exists and ISSUE 2 is only a temporary fix by me so I hope Microsoft reacts fast and gets me permanent solutions :)

I have some issues with the tablet disconnecting from time to time from the base and from the docking station but even these seem to fixed now. That kind of adds up as the "Power/Dock connector" of the Book is just a weird shaped USB3-connection.

I love the design, keyboard, performance, battery life, screen, airplane usability and the Pen - So don't get me wrong, this product is awesome in so many ways and with these "minor" issues fixed it will hopefully become the Best.

Sami and the Book
Posted by Sami Laiho at 11:12 AM